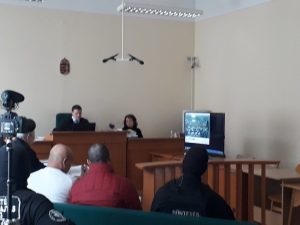 Today, 10th of January 2018, we went to the trial of Ahmed H in Szeged (Hungary). We wanted to show our solidarity with Ahmed who got sentenced to 10 years in prison for participating in the protests on the hungarian-serbian border in September 2015.

In the beginning it was quite shocking for us to see how Ahmed was brought into the court with chains on his hands and feet, hold on a leash by two heavily armed and masked policemen. The second day of the trial was an analysis of video footage. It is four hours long and covered the protests on the border crossing Roeszke (Hungarian side). Second by second and minute by minute the video was shown to find out where Ahmed appears and disappears and what he was doing. For us it was also shocking to see the situation of this day again.

The judge behaved like he was a prosecutor and obviously tried to manipulate him into accusing himself. He asked some leading questions about the evidences he and the prosecutor found in the video. At some point he was succesful with that.

International and local supporters were present for the whole trial and were able to provide at least a smile and some supportive calls for Ahmed which the police instantly tried to prevent.

Also on Friday we will participate in the trial in solidarity and give a more detailed report on this blog, when the first part of the trial is finished.

There will also be a report on twitter for the trial on Friday, 12th of January 2018: https://twitter.com/freetheroszke11

For donation (urgently for his lawyer) please use the following details:

or support through crowdfunding: