Athens, August 26. Alert! What we have been announcing to you for a month and a half has just begun this morning (yesterday morning, Enough 14), just before dawn. Athens’ famous rebel and supportive neighbourhood is completely surrounded by huge police forces: many riot police buses (MAT), anti-terrorist untis (OPKE), police on motorbikes (DIAS), members of the secret police (asfalitès), as well as a helicopter and several drones.

Solidarity from the occupied #Osterholz forest in #Wuppertal (German territory) with the squats in #Exarcheia. They can’t evict a movement! #OsterholzBleibt #antireport #Exarcheia_resist #RefugeesGR pic.twitter.com/vxc09SLgV8

A unique place in Europe for its high concentration of squats and other self-managed spaces, but also for its resistance against repression and its solidarity with precarious and migrants, Exarcheia has been in the sight of the right-wing government since its election on 7 July. The new Prime Minister Kyriakos Mitsotakis had made it a personal affair, especially since he had been mocked in early August for failing to achieve his goal of “cleaning Exarcheia in a month” as he had announced with great fanfare.

This morning, 4 squats were evicted: Spirou Trikoupi 17, Transito, Rosa de Foc and Gare. The offensive currently concerns the north-western part of the district, with the notable exception of the Notara 26 squat, which is considered better guarded and very symbolically important for the district as the first historical squat of the “refugee crisis” in downtown Athens.

There are currently about 100 arrests, including than brutal attacks on people trying to film. Only the mass media in the service of power are allowed to cover the event.

In total, there are 23 squats in Exarcheia plus 26 others around the district, for a total of 49 concentrated in a relatively small area. 49 squats to which other types of self-managed sites must be added, including some rented (Espace Social Libre Nosotros, free shop Skoros, etc.) as well as dozens of private homes groups of activists, often near the terraces to allow access above the streets.

On the squats that are precisely inside Exarcheia, 12 are accommodation squats for refugees and migrants and the 11 others are squats of anarchist and anti-authoritarian collectives (although most refugee squats are also obviously very political, starting with Notara 26 and Spirou Trikoupi 17 with direct assemblies and many links with the rest of the movement).

In the squats of Spirou Trikoupi 17 and Transito (on which servants of power are now bricking up windows), more than fifteen children have been torn from a peaceful and happy existence in order to suddenly being sent to camps. These sinister camps are unhealthy and overcrowded, migrants are malnourished and suffer from temperature variations, humiliation, and sometimes torture, and Mitsotakis also demands that they all be well closed and, in the future, completely cut off from the rest of the territory.

The face of Europe is constantly hardening, the same process is happening in other continents. This evolution increasing authoritarian capitalism leads us to question what the coming times will bring: the offensive against the pockets of utopias coupled with the confinement of the scapegoats reminds us of the dark hours of History.

The whole world is becoming fascist and Greece is once again one of them, one of the laboratories.

But nothing is over. September is coming soon. Seasonal jobs are about to end. The social movement gathers and organizes itself again. Places like Notara 26 and K*Vox are under high surveillance. Answers are being prepared, as well as several major events mobilizers. Autumn will be hot in Athens.

Today! At 11am a call to support the GARE arrestees

Today 7pm a call to rally for the refugees taken to Petrou Ralli Detention Center. #antireport#exarcheia

Currently we are witnessing an increase in institutional violence across Europe. At the EU’s borders expulsions, direct deportations, readmissions and other forms of forced returns across borders are happening on a daily basis. These violent practices are called push-backs.
They are a systematic institutionalised technique used to suppress movement across borders. With our newly developed online tool The Push-back Map, www.pushbackmap.org, we aim to map, document, visualise and denounce these practices. 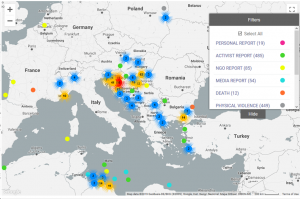