Delayed “justice” in appeal trial: Amir and Akif will finally be freed!

Yesterday, 8 December 2022, the twice postponed appeal trial of Amir Zahiri and Akif Razuli took place in Mytilini, Greece. At the end the three judge Appeal Court acquitted Akif, but found Amir guilty of “boat driving” and sentenced him to 8 years in prison. Compared to the first instance decision, his sentence was substantially reduced, which means that he is eligible for early release on parole. The initiatives Legal Centre Lesvos, Aegean Migrant Solidarity, borderline-europe e.V., You can’t evict Solidarity and Deportation Monitoring Aegean observed the case of the two on Lesvos and welcome their upcoming release from prison. 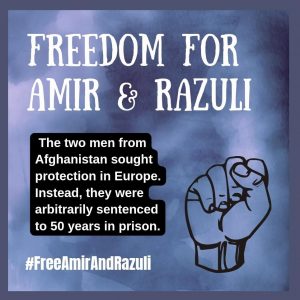 After a day of suspense as to whether the trial would take place or again be postponed, the trial finally started late on Thursday afternoon. Four witnesses testified for the defendants, who were represented by lawyers from the Legal Center Lesvos and Human Rights Legal Project Samos.

At the close of the trial, the prosecutor proposed that Akif be found not guilty, due to the lack of any evidence that he was driving the boat, and the judges agreed.

Despite doubt being raised as to Amir’s guilt, the Court found Amir guilty of facilitating illegalised entry – i.e. “boat driving”. They rejected the argument that Amir was forced to drive the boat out of necessity to save the life of his family and others on the boat – a legal reason for acquittal. However, the court did reduce his sentence to 8 years based on mitigating circumstances, so he now can apply for early release, given his time earned working and studying while in prison. This result, while insufficient, is welcome news for his family.

Although there was never credible evidence against them, both defendants have now been in prison for almost 3 years.

The Coast Guard witness – the State’s sole witness against Akif and Amir – failed to appear once again to testify in court yesterday. In their scheduled appeal trial in April of 2022, said witness didn’t show up, which was used as an excuse to postpone the trial.

This is unfortunately a common occurance in these “boat driving” cases, where the Coast Guard or police are the only witnesses against the accused. Just this Monday, in the case of A.B.,[add citation to our joint press release about the case], the Mytilene Court posponed A.B.’s trial until May 2023, because the Coast Guard witness did not show up for trial, and did not give any excuse for his absence. While the Court fined the Coast Guard officer 200 Euros for failing to show up, this is a mere slap on the wrist, while A.B.’s life is again kept in limbo for another six months. 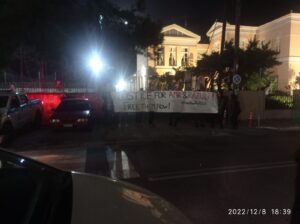 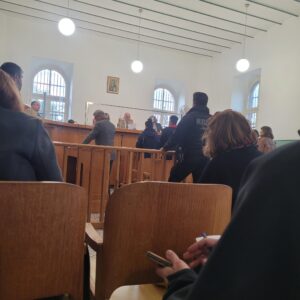 Yesterday, the Coast Guard witness who had given written testimony against Amir and Akif again failed attend the trial. This time, fortunately, the case went forward.

It is important to recall that the defendants testified in the first trial that when they reached Greek waters in their journey from Turkey in March 2020, the Hellenic Coast Guard attempted to push them back to Turkey, and in the process damaged the boat causing it to start sinking. According to the defendants’ testimony, the Coast Guard was then forced to take all the passengers on board and bring them to Greece. Of particular importance, yesterday it was the Prosecutor who raised the issue of whether or not there was an attempted pushback by the Coast Guard during Amir and Akif’s crossing, in his questioning of the defendants. The continued absense of the Coast Guard witness is also of note, given the implications that he may have been involved in this attempted pushback – the real crime in this case.

About 40 people from solidarity groups and the press were present inside the courtroom and gathered outside following the trial. At 7pm, when the verdicts and sentences were announced, the two were greeted with banners and chants celebrating their freedom.

“Yesterday’s acquittal of Akif Razuli, and reduced sentence for Amir Zahiri was a small victory. But this is a very small step in the context in which there are still thousands of people who are imprisoned in Greece with the same charge, simply because they were looking for a better future. We will stand by all those who are in prison for crossing borders and fight with them for their freedom.”, said Kim Schneider from the initiative You can`t evict Solidarity.

Vicky Aggelidou, from the Legal Centre Lesvos, who represented Akif Rasuli stated: “After almost three years, this result is the bare minimum of what Akif deserves. He came to Greece as a refugee and found himself in prison without any evidence against him. We hope that the unjust anti-smuggling law that he and Amir were charged under will be abolished and that the persecution of refugees in the cogs of the Greek justice system will come to an end”.

Annina Mullis, Trial Observer from European Lawyers for Democracy and Human Rights & Swiss Democractic Lawyers: If I only consider this one trial, I have nothing to criticise from a procedural point of view. However, the prosecution of Akif Razuli and Amir Zahiri is not made of this one trial. Even if previous violations were corrected by acquitting Akif Razuli, he will not get back any of the nearly three years he spent in prison for no reason. And we must not forget that Amir Zahiri was again found guilty. Although the sentence was drastically reduced and Amir Zahiri now can hope to soon be released on parole, it still is a politically motivated conviction in a trial that shouldn’t have happened in the first place.

CPT-AMS team stated: “Yesterday’s trial partially restore a great injustice against Amir and Akif. We hope that in the future we will never again see similar cases of people being convicted without evidence and witnesses and without adequate interpretation, as was the case in the first trial of Amir and Akif.”