Press release from the initiatives “You Can‘t Evict Solidarity”, Christian Peacemaker Teams – Aegean Migrant Solidarity and borderline-europe, 26 April 2021
.
Scandalous sentencing of a Syrian refugee on the Greek island of Lesvos to 52 years imprisonment +++ Trial observers strongly criticise the criminalisation of flight
.
On Friday 23 April 2021, the trial of K. S., a young man who fled Syria, took place in Mytilini on the Greek island of Lesvos. He was sentenced to 52 years imprisonment for “illegal entry” and “facilitating illegal entry”. Trial observers from the initiatives “You Can‘t Evict Solidarity”, Christian Peacemaker Teams – Aegean Migrant Solidarity and borderline-europe consider the verdict a scandal. They criticise the unfair trial and once again demand the immediate release of the accused.
.
As he described in the trial, the defendant K. S. fled with his family from the civil war in Syria to Turkey. There, he refused to participate in the Turkish military operation in the civil war in Libya and was subsequently imprisoned and tortured. He managed to flee further to the EU with his wife and three small children. When the family reached the Greek island of Chios in early March 2020 they were denied the right to asylum for one month, like all people arriving in Greece at that time. The background, which was also described in testimony from CPT – Aegean Migrant Solidarity at the trial, is that the Greek state had unlawfully suspended the right to asylum as part of a political dispute between Turkey and the EU, and systematically brought criminal charges of “illegal entry” against migrants seeking protection in Europe. In addition, upon arrival, K.S. was falsely accused of steering the boat in which he and his family arrived on Chios and additionally charged with “facilitating illegal entry”(human smuggling) and “provoking a shipwreck”(endangering life).
.
A trial observer explains about the background of the charges: “The filing of such charges against migrants arriving on the Greek islands, allegedly identified as boat drivers, has been a systematic approach of the Greek state for several years. It is based on the absurd notion that anyone who drives an inflatable boat carrying people seeking protection is a smuggler. Often the accused are themselves protection seekers and have been coerced into driving the boat. In practice, prosecuting “smugglers” means accusing someone from an arriving inflatable boat of driving the boat, whether they were or not. They are usually arrested on the spot without sufficient evidence and held in pre-trial detention for months. When their case finally comes to trial, their trials last an average of only 38 minutes, and they are sentenced to long prison terms, in some cases over 100 years in prison with very large fines. For the charges brought against K.S., the average sentence is 93 years. These proceedings are not conducted fairly or according to the rule of law. We know of hundreds of such cases of people in Greek prisons on these charges, as a report by CPT – Aegean Migrant Solidarity, borderline-europe and Deportation Monitoring Aegean shows (1). Most recently, last year, among others, Amir and Razouli, two refugees, were sentenced to 50 years imprisonment in such a trial and are now in Greek prison awaiting their appeal hearing in March 2022 (2).”
.
After more than a year of pre-trial detention and after the trial had been postponed at short notice until Friday, 23 April 2021, the defendant K.S. was sentenced in just a few hours and in camera for “unauthorized entry” and “facilitating illegal entry” to 52 years imprisonment. He was sentenced to 10 years plus one year for each person on the boat. In addition, the court fined him 242,000 euros. This high sentence was imposed even though he was acquitted of the charges of “endangering human life” and “disobedience”.
.
K.S. was judged not on his guilt for the particular “crimes“ for which he was accused, but as a proxy to condemn migration to Europe in general. K.S. was subject to derogatory statements by the court and jury, being questioned about his Muslim faith and asked why he did not stay in Syria to fight for his country. The trial was riddled with major irregularities. For example, the prosecution’s case was based on contradictory lists of the number of people on the boat. The prosecution’s main witness, a coastguard officer, testified in great detail, but he made no statement on the important question of whether he had seen the defendant driving the boat. In turn, the defendant’s wife testified as a witness and confirmed that he had not driven the boat. When the coastguard officer stated at the end of his testimony that K.S. should be released because he was fleeing a warzone, the prosecutor replied that he could have stayed in Turkey – unbelievable, as K.S. had been imprisoned and tortured there.
.
His lawyers from the Legal Center Lesvos appealed immediately after the verdict. Until then, K.S. must spend the time until the appeal hearing (presumably in about a year) back in the infamous Korydallos prison on the Greek mainland.
.
Johannes Körner from the campaign “You can‘t evict Solidarity” said about the verdict:
“We as well as the initiatives CPT – Aegean Migrant Solidarity and borderline.europe will continue to support the accused in solidarity. We call on Greece and the European Union to immediately end the arbitrary detention of migrants and for the acquittal and immediate release of the accused. In addition, the pending comparable cases must be dropped, or trials must take place elsewhere than the biased court of Mytiline.”
.
A member of the Christian Peacemaker Teams – Aegean Migrant Solidarity added:
“Migrants seeking sanctuary in Europe who are accused of the crime of facilitating illegal entry cannot expect to receive a fair trial in Mytilene court. K.S. was convicted with no evidence positively identifying him. This is indicative of a justice system catering to the vocal section of local society seeking a scapegoat for migration to the island.”
.
Press contact:
Johannes Körner: cantevictsolidarity@riseup.net
.
1) https://bordermonitoring.eu/wp-content/uploads/2020/12/report-2020-smuggling-en_web.pdf
2) https://www.borderline-europe.de/unsere-arbeit/solidarit%C3%A4tsstatement-freiheit-f%C3%BCr-amir-und-razuli?l=de 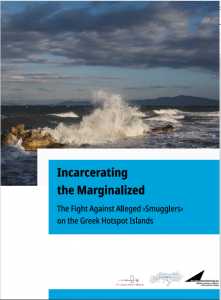