n short, there is
a huge building being besieged (alongside other occupied buildings), and
we are calling for support inside and outside, now and for the days to
come. Attached are images from the roof of the building, and the two
previous statements. Following is the most recent statement.

Statement – We will not let ourselves be taken away! 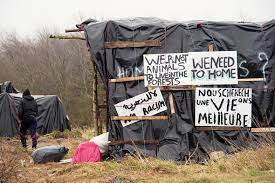 Since Friday 4 February, we have been occupying a building in Rue
d’Ajaccio, which has been uninhabited for a year. This occupation took
place within the framework of the commemoraction, an international day
of mobilization initiated by the families and relatives of people who
have died at the border, to denounce the murderous migration policies of
the UK, France and the EU.

In Calais, about 1500 people are living on the streets in unacceptable
living conditions. Displaced people occupy wastelands and have no access
to basic services: housing, sanitation, water, food and medical care.
The state imposes conditions of extreme precariousness and invisibility
through illegal evictions every 48 hours, the theft of personal
belongings by the police, the illegal dismantling of living sites
without the possibility of defense in front of a judge, and recurrent
police violence. The French and British governments, alongside Natacha
Bouchard and all their other friends, have deliberately turned a
political issue into a humanitarian crisis, keeping people who want to
cross the border in a context of survival.

But displaced people are not the only ones experiencing precariousness
and lack of access to housing in the Calais region. The entire housing
estate which the building is part of is due to be evicted and then
destroyed. While some people, including those in the building we
occupied, have already been evicted, others are still opposing their
eviction in the absence of any alternative proposals from the town hall.
It is in this context that, when the first police officers arrived on
Monday 7th, many residents came to show their support for the
occupation. We were thus able to express our refusal of the discourse of
war between the poor. French or foreign, with or without papers, a roof
is a right. Moreover, the police refused, on several occasions, to see
the evidence of occupation.

Since 2pm today, a disproportionate police presence has surrounded the
building. The police are not allowing anyone to enter, nor are they
allowing food, water or equipment to be provided.

We restate our demands: we demand an end to all evictions in Calais. We
demand an end to the harassment of people blocked at the border by the
police. We demand the regularisation of all squats in the city. Finally,
we demand the immediate requisition of all empty buildings in Calais,
and that sustainable solutions be provided to all inhabitants, whatever
their administrative status or vulnerability.

Until our demands are met, we will not leave these premises. We refuse
to be intimidated by this police pressure and remind you that the time
limit for ‘délit de flagrance’ is over: there can be no eviction without
an enforceable court decision. We will not let ourselves be taken away!

We call on everyone who is in solidarity with the people on the street
and those blocked at the border, and on everyone who believes in the
right to housing to come and help us defend the buildings we occupy! 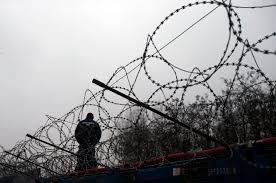 Justice for the Moria 16!

On 10.07.2018, 16 people were arbitrarily arrested by the police after a dispute escalated in the former hot-spot Camp Moria on the island of Lesvos, with which none of the arrested had anything to do. The arrest was followed by charges of arson, dangerous bodily harm and damaging other people’s property. Now, on 07.02.2022, three and a half years later, the case is being heard on appeal at the court in Mytilini, Lesvos.

This approach of the Greek repressive organs has a system: as soon as refugees protest against the catastrophic accommodation conditions or the inhumanity of the European asylum policy, the police react with fierce violence and arbitrary arrests, as for example in the case of the Moria35 and the Moria8 – also in spring 2018.

Mostly, when there are conflicts or disputes in the camp the police does not intervene, but then, after the fact and in a brutal police operation, arbitrarily arrest people without evidence of their involvement in the incident.

The trials that follow such arrests are downright cynical caricatures of court proceedings: Exculpatory witnesses are not admitted. The defendants do not receive translation at all or only partially, so that they often cannot even understand what is happening. Finally, contradictory statements by representatives of the police, fire department or coast guard and dubious witnesses lead to convictions with extreme penalties. For example, in the Moria6 case in March and June 2021, six young people were accused as scapegoats without any evidence for the fires that finally destroyed the Camp Moria in September 2020 and sentenced to long prison terms.

Also in the first trial of the Moria16, another deterrent example should be made, regardless of what really happened in the camp on 10/7/2018. One of the defendants describes the situation of the arrest as follows:

“There was a fight in the camp between a few people that lasted more than two hours […] The policemen were laughing at the people. For them it was like an online movie. We asked them for help, but they just laughed at us, took pictures and recorded us […] Finally, they rushed into the camp, but to the people who were not involved in this fight, and they attacked the innocent people. We had no possibilities to escape, […]. The police took us to the police station, beat us, treated us very badly and called us attackers. For several hours our hands and feet were tied. We couldn’t communicate with them because we didn’t know their language and they opened a case for each of us for no reason.”

Now the previous verdict may be revised on 07.02.2022. Critical trial observation and a counter-publicity are urgently needed so that the defendants of the Moria16 case finally receive justice. The criminalization and arbitrary court cases in which people are made scapegoats of the failed migration policies and their consequences must be brought into public focus.

We will stand in solidarity with the criminalized people in this case and others, support them as much as possible and work to make their stories visible.

We demand justice and freedom for the Moria16 – and for all others who are sentenced to years of imprisonment in unfair trials, mostly innocently!