We document a report from the 2nd trial date against the accused Harmanli 21 from 5. June 2018 by our comrades from bordermonitoring Bulgaria. 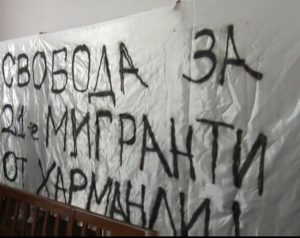 Banner in the court: „Freedom for the 21 migrants from Harmanli“

On the 5th of June 2018 the trial against the Harmanli 21 was postponed again. As last time, 10 of the 21 accused migrants were present. The hearing started with people in attendance to support the migrants. They took out a sign saying “Azadi” (the word for “freedom” in several languages. They also showed a banner in support of all the persecuted, saying “Freedom for the 21 migrants from Harmanli” in Bulgarian. Afterwards they were expelled from the court room. One of the migrants was rudely silenced by the judge for thanking the protestors.

The supporters claimed that they are not a part of an organization and just people, who came in solidarity. Some media did not quote their banner correctly afterwards and some media reports following the events on the very same day noted that among the supporters were foreigners and not everyone spoke Bulgarian language. A journalist challenged the protesters with a question about police being injured during the riot. One of them answered, by stressing the fact that a 15 year-old boy was in a coma after police violence following the riot and no police has been investigated or accused until today.

The hearing continued with only two out of the 10 present migrants disagreeing with starting the trial right away. The statements of all the lawyers were pleading against a start – they argued that one month has not passed since the start of the search for the 11 missing migrants. The trial was postponed until August 7th, 2018 at 13.30 h in the Regional court in Harmanli.