A new wave of repression against a collective, self-organised and solidary movement of refugees and Greek as well as international activists has started in Greece:

In the early hours of 27th of July 2016, the three squats Orfanotrofeio, Nikis, and Hurriya have been evicted. Migrants, Greek and international activists were living in these houses together.

The “Social Centre For All”/ NoBorderKitchen on Lesvos and the camp at Piräus port also were evicted the same day. At the same time the mayor of Athens pressed charges against the refugee squats in public buildings in the city. These squats are places in which we could meet and network, live and fight together beyond categories of nationalism, racism, and sexism.

During the evictions more than 100 people were detained. Charges have been pressed against 70 of them. Some of the trials already took place in the following days and weeks. Activists were convicted of breach of domestic peace and destruction of “private/public property” and therefore are obligated to pay a fine or even got suspended sentences. Other trials have been postponed.

These repressions are the governmental strategy to intimidate activists and to weaken the movement of solidarity. Just a few of us are directly affected but we’re all targeted by this move. Therefore, it is important to be strong as a one movement and not to leave anyone behind.

We responded with resistance and direct actions immediately:

There have been demonstrations in Thessaloniki, Athens and other cities in Greece and other European countries, actions in front of the Greek embassies and consulates, a symbolic occupation of the offices of Syriza’s and other parties and the occupation of a theatre building… 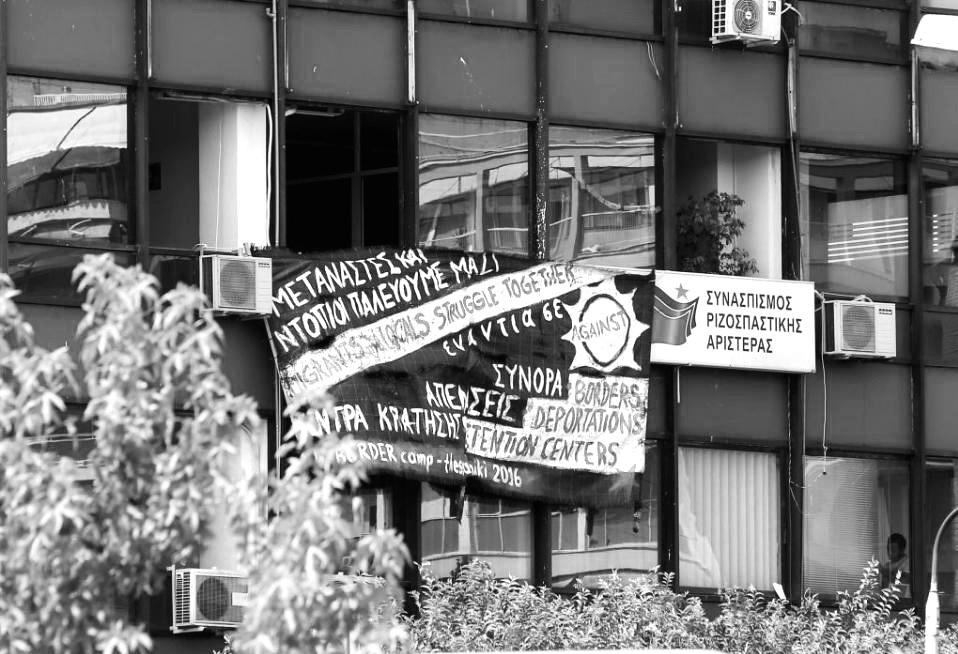 A group of activists protested against the eviction of Orfanotrofeio by spreading flyers during the mass in a church. All of the 25 activists were arrested and convicted in a summary judgment.

Besides, 3 persons from Softex Relocation-Camp were charged of criminal assault on a cop during a protest caused by the death of 17 year-old Asas Ragda, who was pregnant. She died on the 28th of July 2016 because emergency medics on side denied treatment to her. They haven’t been sentenced by now.

The assumed left-wing government Syriza showed once again their true colour. The evictions and following repressions seem to be a desperate attempt to destroy a powerful transnational movement of solidarity. The Greek government is indeed pressured by the migration policies and austerity measures of European Union but this example shows once again that we cannot trust in any government to make some change. It shows very clearly that we need to establish other structures.

They can take our buildings but not our solidarity!

We have to expect more state repression and we will have to play the long game to help people in different countries under different circumstances to cope with this. It could possibly be necessary to pay legal costs for about 100 people. Expecting these costs to be between 200€ and 400€ per person this would amount to a total of 20.000€ to 40.000€. Additionally, there are until now two persons convicted to pay a fine (one 1200€ and the other 4000€). There may also be more costs for lawyers and appeal trials.

This is obviously a huge amount of money so we urgently need every penny, now and in the future. However, raising money for the financial support can and should only be part of our work. To know that we have vivid anti-repression structures to rely on is essential for sustainable activism. 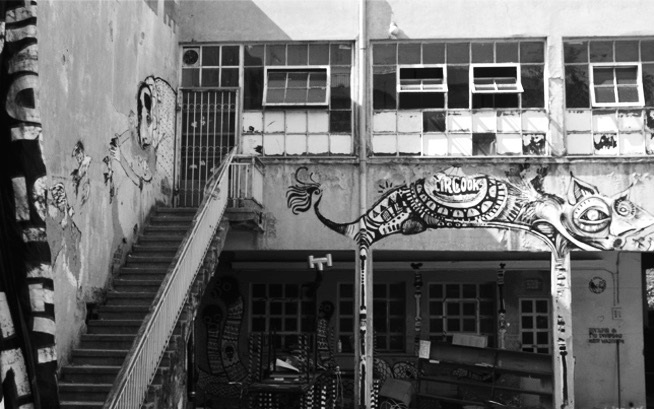 the Orfanotrofeio squat before the eviction

The fight goes on – we won’t stay calm!

The occupation of empty buildings is one of many practical steps to the self-organised creation of a better life. It’s a way to create free space for us to organise politically, network, meet, learn from each other and live together autonomously and in solidarity – an alternative to precarious circumstances and state control. We need more and new squats and we will occupy them! Not only in Greece but anywhere, because we’re all affected by neoliberal politics.

Altogether, we can face the repression easily and stick together as one movement even stronger after this summer.

So let’s collectively start a powerful international anti-repression campaign. Let’s grow together as a movement in Greece and anywhere else and get organised and create alternatives to national and European policies of exclusion and exploitation!

Our passion for freedom is stronger than their prisons!

*Background information for the occupation of Orfanotrofeio:

The empty church building Orfanotrofeio was squatted in December 2015 in the course of the upcoming eviction of the camp Idomeni at the Greek-Macedonian border. Thousands of people had been stranded in Idomeni since the closure of the so called “Balkan route”. Until the latest eviction in July 2016, more than 100 people lived in Orfanotrofeio. Families and single persons on the move found a home here. It was a self-organised space which was an important contact point for supporters and people on the move all over northern Greece and Macedonia. On the 27th of July 2016, it was not just evicted but directly demolished. A lot of personal belongings as well as donations were still in the building during the demolition. The eviction of a building must be commanded by the owner which in case of the Orfanotrofeio was the church. Therefore, the church is directly responsible for the eviction and demolition.

[*]With the usage of the terms migrants, greek and international activists we don’t want to reproduce racist or nationalist categories but emphasize that persons of different origin will be differently affected by state repression.