In July 2017 35 persons were arrested (because of skin colour and nationality) after a big and peaceful protest in the camp Moria on Lesvos (Greece). This protest was forcefully attacked by the police; since then the accused are in prison. They are facing up to 10 years of prison and loss of all rights for protection by asylum. There is a Crowdfunding-Campaign by the Legal Center Lesbos whose aim it is to collect money for lawyers to support the accused. 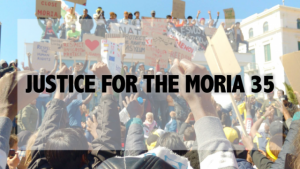 Here we doucument a call by the Legal Center Lesbos:

On 18 July 2017, police violently raided the overcrowded open-air Moria Detention camp on the island of Lesbos in Greece, arbitrarily arresting 35 individuals – the vast majority of African-origin or descent.  This, in response to a peaceful protest earlier that day by Refugees of all nationalities for freedom of movement and against inhumane camp conditions, which was also met by police brutality, outside the EU Asylum Office. Many of those arrested were not even present at the protest.

To highlight the seriousness of this case and the extent of police violence, Amnesty International have called on Greek authorities to immediately investigate excessive use of force amounting to possible torture.  An investigation has now been opened into dangerous bodily harm committed by unknown police officers.

The Moria 35 each face criminal charges which may lead to up to 10 years in prison, exclusion to the right to international protection and deportation to countries they fled.

Who are Legal Centre Lesbos and how can we all help?

Legal Centre Lesbos works on the expertise of a small International and Greek team of professionals and volunteer international lawyers and law students.  Hosted in the Mosaik Refugee Support centre in Lesbos, we provide free Refugee legal support.  We are not government funded and every resource goes towards those at the heart of our project.

Having represented 34 of the 35 defendants at their initial hearings, Legal Centre Lesbos led the creation of a criminal defence team of Greek lawyers, continues to represent six defendants, and is now helping to coordinate the work of the criminal defense team. The trial is expected for early 2018.  We are urgently raising funds to cover the costs of legal representation, associated administrative and court fees and a team of independent trial observers to ensure international oversight and accountability in this highly politicised trial.

With limited time remaining we must urgently raise £10,000 to help achieve justice for the Moria 35.

Please consider donating to help us achieve the target.
We also need you to share:  Be our voice!