The appeal trial of Amir Zahiri (27) and Akif Razuli (24) scheduled for today in Mytilene court, was, once again, postponed to a later date, 8 December 2022.

After being interrupted on 18 March (1) due to the caseload of the court, the trial has now been postponed under the pretext that a witness, an officer from the Hellenic Coast Guard, was absent in court. 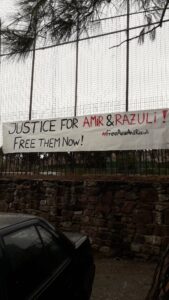 This witness was already absent from the first instance trial and had provided a written report which only related to charges of “causing a shipwreck”, for which both defendents were acquitted in the first instance. It is therefore highly questionable why his irrelevant testimony was a sufficient excuse to postpone the trial once again. Furthermore, the court had the authority to read his written testimony in court, rather than postpone the trial, as they had in the first trial.

Despite a request by the lawyers to free both men until their trial date in December,  with which the Public prosecutor agreed, the Court of three judges finally denied the petition, ordering that they remain in prison.

Following today’s hearing, Amir and Razuli will thefore be forced back into prison for at least eight more months, away from their families and friends. To date they have already spent over two years behind bars, despite the lack of evidence against them. Razuli and Amir have already been transferred twice back and forth between Lesvos and detention centres in Serres and Chios respectively, each time with the hope of having a final decision in their case and being released. Causing extreme and uncessary distress, each postponement is an obstacle to the a fair and speedy administration of justice. This further delay is a denial of justice.

The repeated criminalisation of migrants, such as in this case, stands in stark contrast to the complete impunity for violence against migrants at Greece’s borders, despite the insurmountable evidence of systemic pushbacks carried out by the Hellenic Coast guard in coordination with the Greek police.

Vicky Angelidou, from the Legal Centre Lesvos, and one of the lawyers for the accused, stated “with shocking decisions such as today’s and the decision in the first trial, Greek courts are destroying the lives of people who only wanted a better future in Europe, showing their total detatchment from reality, and the lives of the people they are judging.”

A spokesperson for CPT-Aegean Migrant Solidarity said: “People charged with smuggling offences constitute the second largest prison population in Greece. We are glad that the spotlight is finally being put on these unjust procedures, but as today’s decision has shown, even this is not enough. On a regular basis migrants are swallowed into the prison system, convicted without anybody knowing or caring who they are.”

Annina Mullis, a representative of the Swiss Democratic Lawyers’ Association, who was observing today’s trial stated, “an 8 month postponement for no reason is a clear violation of procedural rights – based on the European Convention on Human Rights, courts are obliged to move procedures forward expeditiously, especially when defendants are in prison. What we have witnessed today was an arbitrary show of force in a politicised court room.”

Kim Schneider, spokesperson for the solidarity initiative You can`t evict Solidarity, pointed out: “It is unbelievable. Once again, the trial of Amir and Razuli has been postponed. We are so furious that we are speechless. We cannot explain this to the young men nor their families whose lives are being destroyed. We need to take political action now.”

(1) 18.03.2022 – Press release: Appeal trial against Amir and Razuli interrupted after two days of waiting till the 7th of April 2022 https://www.borderline-europe.de/unsere-arbeit/press-release-appeal-trial-against-amir-and-razuli-interrupted-after-two-days-waiting