After five postponements of this trial since the eviction of Hurriya-Squat after the No Border Camp in July 2016, it finally came to an judgement. The accusations of the 60 arrested persons (July 2016) were Disturbance of domestic peace as well as collective participation in criminal damage of particularly high value. More over, 30 out of 60 persons were accused of violation of Presidential Decree ( 27 n.1 article of the 342/1977).

Due to a lack of personalized proofs for the whole accused group, the court’s judgement was an acquittal for every person! Six lawyers were defending these 60 people and the costs that developed out of this trial will be paid by this campaign You cant evict solidarity!

Big thank and appreciation to the six lawyers who defended the accused people in the Hurriya-trial for such a long time! We are very happy about a successfull ending with an acquittal of this trial – especially in these extremly repressive times! 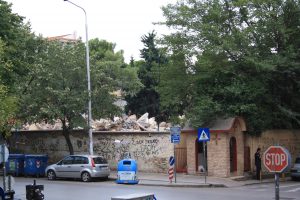 Outcomes of the 4 trials held until now:

Two Italian activists as well as one person from Patras were cleared of charges. The 6 activists from Thessaloniki were sentenced to 4 months in prison on probation (2 years) (meaning that if they commit a crime within those 2 years, they will have to go to prison for 4 months), another activist was sentenced to a fine of 5 Euros per day over the course of half a year, amounting to 1200 Euros in total, and additional court fees of 200-400 Euros per person. Stand in solidarity and donate money for the people affected by this!

During a protest against the eviction of Orfanotrofeio squat, flyers were handed out during a mass in a church in Thessaloniki (in Greece, evictions of buildings have to be requested by the “owners”, in the case of the Orfanotrofeio, this was the church). The police entered the church and arrested 24 activists on the accusation of “disturbance of religious practices”. They were brought to a police station for identity detection. Refugees as well as non-refugees were accused. Activists who refused to give their fingerprints were sentences to 6 months in prison on probation (3 years). Everyone else was cleared of all charges but still have to pay the court fees.

The four Swedish and one Greek friends were sentenced to 10 months prison on probation (3 years). In addition, one person has to pay a fine of 4200 Euros, and every person has to pay court fees of 200 to 400 Euros. The lawyers stand in solidairty and don’t request payment. The person who has to pay the fine has filed for appeal.

Three friends are accused to have hurt a cop during the riots and protest caused by the death of the pregnant Asas Ragda, who was denied medical treatment on Thursday, July 28, 2016 in the Softex camp near Thessaloniki. The verdict is still unclear. Show your solidarity!