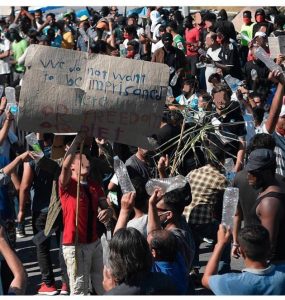 Moria has burned to the ground. The fires that destroyed Moria camp on the Greek island of Lesvos on September 8 put the world’s spotlight on the EU’s and the Greek state’s inhuman and racist policies at the European borders. The furious reaction of the Greek state to the desperate and self-empowering resistance of people – who were forced to live and suffer in the overcrowded camp in inhuman conditions for years – is again more repression and criminalization.

The events are closely entangled with the ever-worsening politics of incarceration. Since March, the camp has been under lockdown and people were trapped without the most basic supplies. In September, the Greek government concluded a contract with a private company to transform the entire camp into a prison surrounded by double barbed wire fencing and equipped with security gates – financed by the EU. The Covid-19 pandemic has been instrumentalized to push for these plans. Instead of providing appropriate health facilities, the Greek state tried to lock up thousands of people crammed together behind barbed wire. When Corona broke out under these circumstances, the camp started to burn. 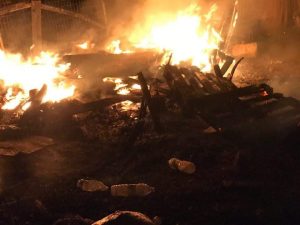 Shortly after the fire, the Greek police arbitrarily arrested six people, five of them minors, all six of whom deny participation in setting the fires.

The six were charged with arson with danger to human life, a felony charge, and participation in a criminal group, a misdemeaner charge. On 21 September, all six were also ordered to await trial in pre-trial detention. (https://www.stonisi.gr/post/11598/profylakisteoi-kai-oi-6-kathgoroymenoi-gia-emprhsmo-toy-kyt-morias-realtime)

The court based the charges on the testimony of a single witness also living in Moria camp. He identified the six young men by providing common first names to police, and identifying them through low-quality photographs taken  for the asylum procedure.

There are a number of reasons to believe that these accusations are not credible. On the one hand, the witness is a community leader within the camp and there have been several cases before in which community leaders were pushed by the authorities to testify against alleged criminals within protest movements and were then rewarded with the possibility to leave Lesvos Island for the mainland. (https://legalcentrelesvos.org/2018/09/02/police-coerce-community-leaders-to-turn-over-individuals-responsible-for-violence-in-moria-camp/) On the other hand, the accused are all from the Hazara community (contrary to the witness), an ethnic minority from Afghanistan that is systematically discriminated and persecuted in the country.

Above all, it is not the first time that randomly selected people are taken to court and accused of alleged crimes during protest movements. (https://dm-aegean.bordermonitoring.eu/2019/02/19/ongoing-criminalization-of-refugee-protests-upcoming-trials-against-migrants-on-lesvos/)

The case of the Moria 35 (http://legalcentrelesvos.org/category/news/moria-35/) clearly shows how people have been arbitrarily arrested and convicted through a trial that broke core principals of the European Charter on Human Rights (http://legalcentrelesvos.org/wp-content/uploads/2018/10/Observation-report-Moria-35-VERSION-COMPLETE-AVEC-LES-ANNEXES.pdf), despite the fact that many of them were not even in the camp at the time of alleged crime. The Moria 8 (https://dm-aegean.bordermonitoring.eu/2019/02/23/moria-8-declared-innocent/) were also arbitrarily arrested after protests in Moria camp. They were eventually released in February 2019 after eleven months of unjust pre-trial detention because they were clearly innocent.

The Greek state’s attempt to now blame a group of boys for the obvious failure of the Greek hotspot system is revolting. At the same time, there are attempts to criminalize supporters and NGOs. However, it is neither the people seeking protection and struggling for a better life nor supporters engaging in human rights work who are guilty for the dramatic situation in the hotspots. The disaster of the camp is the result of the European Union’s and the Greek State’s policies.

Since the EU-Turkey Deal the Hotspots on the islands have become open-air prisons, with the full political and financial support of the European Commission and EU member states. In the last months of the Covid-19 crisis, the Greek government pushed forward its plans (supported by the EU) to build closed camps at the EU external borders, so called “controlled centers”, by fencing the people in Moria behind barbed wire. Basic human rights were ignored; medical and legal support were increasingly made impossible. Even the right to asylum was suspended and people were illegally pushed back to Turkey. The new Pact on Migration only entrenches and deteriorates this system of systematic disenfranchisement, taking the system of Moria camp as blueprint for their asylum policies.

The detained are not guilty of the crimes for which they are accused! Even if anyone who lived in Moria camp did set the fire, as an act of resistance against a system of deliberate disenfranchisement and destitution, it is clear that the real arsonists are those who make the camp system possible and keep it running.

We demand the immediate release of all the imprisoned accused of setting the fire!

We demand the closure of all camps and detention centers!

Freedom of movement for all!

We will support the accused in any way we can in the court cases, in the prisons, by publicity…