Still no justice for the Moria6

Mytilene. Today, Tuesday 7 June 2022, A.A. and M.H., two of the six teenager charged and convicted for the fires in Moria camp in September 2020, stood before the Juvenile Court in Mytilene/Lesvos. In what was once again a very hostile and far from impartial trial, the first instance verdict was upheld despite the fact that there is still no credible evidence. Only the sentence was reduced from five to four years. 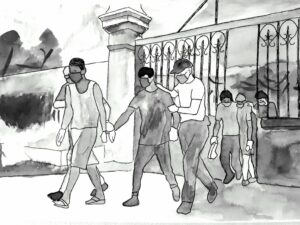 The two teenager had come to Lesbos from Afghanistan as unaccompanied minors seeking protection in Europe. They were only 17 years old at the time of their arrest in September 2020. They were arrested after the Moria camp burned down completely on 8 and 9 of September 2020 and have now been in detention for almost 2 years.
On 9 March 2021, they were found guilty of “arson endangering human life” by the Mytilene Juvenile Court in a first trial that disregarded basic procedural standards. Although no credible evidence could be brought against them, both were sentenced to 5 years imprisonment without recognition of mitigating circumstances.(1)

Today’s appeal trial was also riddled with improprieties and procedural errors, even before the trial. As the court forgot to send the first instance verdict to the Court of Appeal, the date for the appeal hearing was set at extremely short notice, leaving very little time for the team of the Legal Center Lesvos to prepare the defence.

While many supporters of the two defendants had gathered in front of the court, the injustices continued in the courtroom: the prosecutor had nominated 26 witnesses – almost all of them are police officers and residents of the village of Moria near the burnt down catastrophic camp Moria. None of them could identify the defendants. At the same time, the two witnesses for the defence, who were supposed to testify about the catastrophic conditions before the fire in the camp, were not admitted by the court.Only one defence witness was admitted, a member of M.H.’s family.
At the end of the trial, the two were found guilty again, but their sentences were reduced from five to four years because of their “good behaviour in prison”.

In the end, the release of at least one of the accused, A.A., could still be obtained today: Already at the beginning of March 2022, the lawyers filed an application for the release of the two teenager, since both had achieved the prerequisites for a reduction of sentence and release according to Greek law through work and school attendance in prison, as well as through proof of a permanent residence. However, the court will not decide on M.H.’s release until 5 July.

Christina Karvouni, CPT Aegean Migrant Solidarity: “We should note once again, two years later, that the crime is that the Moria detention centre existed. Instead of the Greek justice system investigating this crime, it has chosen, with unsubstantiated accusations, to put the burden of its destruction on 6 people, two of them recognized minors.”

Julia from borderline-europe: “While Europe has already forgotten Moria and the fire, two minors have now spent two full years in prison. Hopefully they will be released soon, but Europe has destroyed their lives. Several times.”

Luca Wolf, from the campaign “You can`t evict Solidarity” and part of the Solidarity Campaigne #FreeTheMoria6, which supports the defendants, explains: “We are angry about this renewed injustice. But we will continue to fight and demand freedom for all Moria 6 detainees!”

The appeal hearing against the other four teenager of the Moria6 will take place on the 6.3.2023. The teenager convicted as adults were sentenced to 10 years imprisonment in a political trial, also without evidence. Also in this case, the only so-called witness did not appear in court. (2)