“Police officers in Mytilene do strange things I cannot understand.”

After 11 months of unjust detention, the Moria 8 have finally been declared innocent and will be released. On the 22nd of February 2019, they were brought to the High Court in Chios where it took the three judges and the four person jury only an hour and a half to acquit them of all charges.

The eight men were arrested on the 19th o 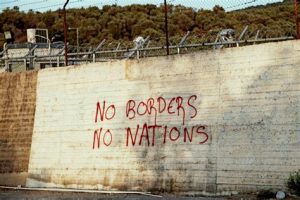 f March 2018 and accused of attacking the police and arson during protests in Moria camp five days before. Five of them were kept in detention for eleven months, two in the prison Korydallos and three in the prison on Chios. There was no investigation and the alibis proving the absence of at least two of the accused during the protests were neither taken into account at the pre-hearing directly after the arrest nor at the submitted objections against the detention. None of the 17 police men who were on duty during the protests in the camp had been invited to the pre-hearing and asked to identify any of the accused.

The accusation of the eight men from Syria and Iraq only relied on one testimony of another camp resident. Three months before the trial, the man sent a video to one of the defendants, where he apologizes for making wrong accusations and states that: “I snitched on them falsely because I had problems, I was under threat and I had to leave Mytilini.” When he gave his testimony, the police arranged for him to directly leave to the mainland.

The president of the High Court listened to eleven testimonies from the 17 police officers who all claimed that they were unable to recognize any of the defendants. She did not even ask the three defence witnesses to testify. She stated:

“Police officers in Mytilene do strange things I cannot understand. They took people to prison because of one testimony that does not justify this. Every now and then, they send people to the High Court without any reason. There is no case. The police departments in Mytilene should coordinate better. If there is something happening, you should investigate.”

It was the same judge who had convicted 32 men of the group of the Moria 35 one year before, although there was no reliable evidence.

Vici Angelidou, the lawyer of four of the accused stated:

“The judge and the jury did not even have a meeting in order to take their decision, they looked at each other and made it directly in about ten seconds.”

The judge found clear words for denouncing the injustice happening on Lesvos, where migrants are frequently targeted by police and can be detained up to 18 months without any investigation. Still, the practice of random arrests and legal accusations has not stopped. There will be more court cases against refugees from Lesvos Islands on 28th of February, 9th of May and 10th of October 2019.

We demand the police and the court of Mytilene to stop these crackdowns on refugee protests and the criminalization of people seeking international protection in Greece!