We document a report by the FreetheRöszke11 of which we are also a part:

The trial is over. We are somehow speechless, captured between hope and rage about the conviction. We need to reflect upon the final verdict and will soon publish a statement. For now, all our thoughts and messages are with Ahmed! 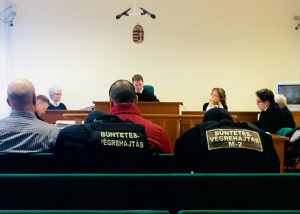 Nonetheless we share with you a statement of the international observation delegation, amongst others formed by European Civic Forum and Swiss Democratic Lawyers:
(get their pdf in English // Deutsch // Francais)

Statement of the international observation delegation of the trial against Ahmed H.

Szeged, Hungary, 20.9.2018
On September 20 th 2018, we were again as international observers at the trial against the Syrian Ahmed Hamed in Szeged (Southern Hungary). In September 2015, Ahmed H. had accompanied his parents and his brother’s family fleeing the war from Syria to Europe. He himself is married to a Cypriot woman and has two children with her. He was helping his family for obvious humanitarian reasons. Unfortunately, violent clashes between the police and the refugees occurred near the little town of Röszke after the sudden closing down of the Hungarian border. Ahmed was then arrested as a “gang leader”.

In the first instance, Ahmed H. was sentenced to 10 years imprisonment for “terrorism” in a summary trial. In the revision in March 2018, at which we already assisted, the sentence was reduced to 7 years. The accusation of terrorism remained.
Now the trial in the second instance took place before the Court of Appeal in Szeged.
After the pleas of the public prosecutor’s office and the defence, as well as the final word of the accused, the three judges announced their verdict the same morning. Although the prosecutor still insisted on an extremely high sentence of 14 to 25 years of imprisonment, the judges reduced the sentence to 5 years.
The Court of Appeal considered it as proven that Ahmed H. had initially mediated in the protests against the closing of the border and helped injured persons. After the police had massively used tear gas and water cannons against the migrants, old people and children, Ahmed and other migrants threw stones against the police
officers posted behind the border fence. The judges argued that through his behaviour, the accused had used forceful means to demand that Hungarian border should be opened for migrants – against the will of the police and of the Hungarian state. In their interpretation, this equalled terrorist handling. In our eyes, this is an untenable construct to legitimise the accusation of “terrorism”. In Hungary, terrorism is punishable by a minimum sentence of 10 years of prison. The Court of Appeal pronounced, like the second judgement of the first instance, even less than the minimum sentence because it took into account Ahmed’s mediating behaviour and his
regret about the stones he had thrown.
But nevertheless: Ahmed H. is now convicted as a terrorist for having thrown five stones from a distance of 30 meters against a police cordon. Nobody had been hit or injured. As international observers, we are extremely shocked by this sentence. This verdict shows once again that the trial was a political trial, in which Ahmed H. had to serve as a scapegoat to justify the anti-refugee and racist policies of the Hungarian government. The sentence equally shows the lack of independence of the judges from the government. Moreover, through the extensive use of the concept of terrorism, the verdict opens the door to the further criminalization of refugees and their supporters as well as of possible oppositional social movements.

Ahmed H. has already been in detention for three long years. The court recognises that these 3 years will be taken in account in the punishment of 5 years. Additionally, Ahmed has been banned from the country for 10 years and has to stand up for most of the costs of the proceedings. Fortunately, the judges also ordered the transfer of Ahmed to the normal prison system and stated that if good conduct continued, he could be released conditionally in four months.

We hope that Ahmed H. will soon be able to return to his wife and children! This would at last be the end of a kafkaesque tragedy that has shown the lack of independence of the legal system from a brutal political power.