Next trial against Ahmed H. on the 20th September 2018 in Hungary: Call for solidarity and international trial observation in Szeged, Hungary

On the 20th of September 2018, the trial of the Hungarian State against
Ahmed H. is going to the second level of court – for the second time.

Date:
20th of September, 9 am
Re-Trial of 2nd level court

Ahmed H. has been convicted for “terrorism” in Hungary, because he has
been protesting with thousands of refugees at the Serbian-Hungarian
border crossing of Röszke in September 2015, when Hungary suddenly
closed its borders to the people traveling through. 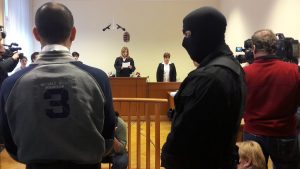 The case against Ahmed H. is a political show trail by the current
Fidesz government of Victor Orbán. To stir up their racist rhetoric’s,
they needed a scapegoat to keep up the fear of the apparent “Muslim
terrorist invaders”.
They constructed absurd allegations against Ahmed, with no evidence to
ground them (read or report on the last trial here).

On the first instance court in March 2018 (held for the second time),
Ahmed has been sentenced to 7 years in prison. This was just before the
presidential elections. The Orbán government has not been shy in
constructing Ahmed as proof of the foreign threat of which Orbán wants
to protect Hungary and Europe. The defense, as well as the prosecution
have appealed against the decision.

Now, the second instance court will decide again. We cannot let this
absurd trial continue. As Ahmed H. has pointed out, if we ignore his
trial, he might be only the first victim of this new far-right juridical
system:
“If they can punish me, they can punish everyone. Through this trial
they create a new law. I was just one person in a crowd of many people
and they punish me for terrorism. If they do this to me, they can also
do this for any other people in a crowd in the future.”

Ahmed has already spent three years in Jail. He needs to get out now! We
need to be present, monitor the trial and show solidarity with Ahmed H.!
Spread the Information! Come to Szeged! Show your rage to the Hungarian
Government!
#FreeAhmed #FreeTheRöszke11