In the year of 2015 – as consequence to the so called long summer of migration – thousand of people filled public places in Belgrade, the capital of Serbia. Empty buildings were occupied for collective housing and as protection against the cold. Parks were used for sleeping and spending the waiting time until a new possibility to continue the journey to the north shows up.

Nowadays, the parks are empty again, squatted halls or bulidings have been evicted or demolished –  mainly in spring 2017. Most of the refugees have been brought to camps outside Belgrade. Also the camp in the southern village of Preŝevo still exists. Within the context of the statewise organized corridor in 2015 and 2016 this camp was used as a transit camp to register people on the move. Back then, the situation was a humanitarian catastrophy. Now, according to activists, it appears like an open prison, where around 1000 people are being kept for months. It seems to be hard to leave this camp as public transportation (is forced to) deny taking refugees in direction to Belgrade althought they already entered and registered in Serbia. This opens up a profitable market for mafia-close structures or traffickers to take heaps of money to drive refugees by car or taxi to the desired places – as there is no other option. More over, the police enters the camp on a regular base to demand people to leave „volontarily“ back to Macedonia, it is a cynical form of push-backs. Indeed, people obviously leave back to Macedonia due to better chances to cross the border again with the aid of traffickers without ending up in Preŝevo.

Hungary‘s migration policies make it almost impossible to cross the border from Serbia to Hungary (EU) without being caught by border police or violent border hunters and being arrested, imprisoned or pushed back. So now people try to pass into the North via Croatia. Recently, some hundreds of people on the move got stuck in Sid, at the border crossing from Serbia to Croatia. They built up so called wild camps and protested against the harsh border regime. The response to this protest was the forced encampment of people claiming their right to move. The role of Serbia, but also of Macedonia and Croatia, becomes more and more clear. They function as a buffer zone towards the EU, especially considering the fact that the majority of refugees do not want to stay in these contries, but rather cross them on their way to Northern European states.

In general, the invisibilization of refugees and migration in publicity can be noticed by isolation and imprisonment of the people on the move. 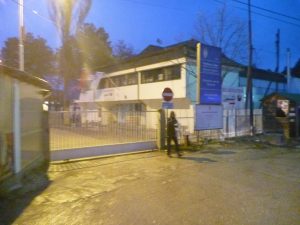 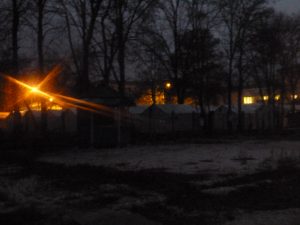 Interview with an activist who works with refugees in Belgrade

Today in Serbia there are about 4000 to 5000 refugees, mostly living in 18 camps scattered all over the country. About 500 live outside of the official centres in informal settlements. Whether in the so called “jungles” at the border with Hungary or in dismissed factories like in Sid, at the Serbian-Croatien border or in abandoned buildings in Belgrade. They have very limited or no access to main needs, such as water and sanitation. But also whether in or outside of official camps, they live in constant precarity.

The option of requesting asylum in Serbia remain sporadic and very limited. In 2017 only 3 persons received refugees status in the country, the rest have been rejected, but the most do not even manage to apply for asylum because legal and administrative support is very poor and not available in all different camps.

Which (refugee) camps play an important role in this country?

Presevo (Serbian-Macedonian border): The entry point at the border with Macedonia remains under special administration of the Ministry of Labour. Implementing a restrictive regime on the freedom of movement, it is perceived mostly as an open prison by most of refugees. On the contrary, living conditions and access to certain services are better than in other camps.

Obrenovac/Krnjaca (Camp in the South of Belgrade): This camp is identified respectively as camp for single young men and for children under 15 years,  which means for unaccompanied minors.

These two camps, both not far from Belgrade, are considered as the main hubs for finding a way out from Serbia. The security and living conditions have deteriorated from last summer. There are gangs and people living in the camps reported several incidents, which are only resolved with violence or harassment by police or KIRS (Commisariat for refugees and migration) employees.

Serbia used to be a transit country and now became a place where people remain trapped. Stuck and left alone, they are pushed to take higher risks to find a way out. In 2015 Serbia was just another country to stop by and continue along the route, today it is still a very important crossing point but can be a dead end, from where it seems impossible to leave.

I can talk about the public political discourse in Serbia, which after 2016 shifts closer and closer to the V4 countries (Visegrád Countries: Hungary, Slowakia, Czeck Republick and Poland). You can recognize more xenophobia, more discrimination, but at the same time Serbia is trying to remain faithful to the EU and not openly joining the V4, because Serbia must enter into the EU market as soon as possible.

Criminalisation of solidarity remains very high, but more subtile and invisible compared to 2016 when the government published an open letter forbidding different organisations to provide food in the city centre.

It is painful but rewarding. However, from the emergency phase we are now in a different stage of the political and humanitarian response. In other words money is going directly to the Ministries and not the NGO sector. This creates a big lack of checks and balances resulting in a deterioration of access to basic services. But also it legitimates the Serbian government politics and more widely the EU policies of exclusion and discrimination, by which it is better to have thousands of people outside of the EU-border rather than including them within the EU asylum system.

There are several organisations which remain active but the individuals and self – organised response has been shrinking after more than 2 years of engagement. There is a need of finding new narratives, new struggles because the context has changed and today in Serbia as well as in other European countries, the main issue remains integration, access to services such as rights but also housing, education and work.

What we see in Sebia continues to reflect more complex regional dynamics by which the negative effects of the EU migration policies are clearly visible at the external EU borders. Such as the constant use of violence as deterrence at the border, the strategy of encampment, the deterioration of political discourses which continue to legitimize xenophobia and securitisation rather than inclusion as well as clear and safe access.