On 22 June 2022, a 27-year-old woman who, in desperation, attempted to self-immolate in the notorious Moria 2 camp on the Greek island of Lesvos, now faces trial for arson. 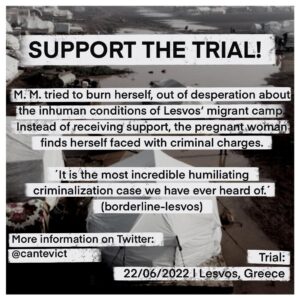 On 21 February 2021, the heavily pregnant M.M. had attempted to take her own life by setting herself on fire at the new Mavrovouni Reception and Identification Centre (RIC) (also called Kara Tepe or Moria 2) on Lesvos. The neighbouring residents in the camp rescued her from the burning tent and extinguished the fire with water bottles and towels. M.M. suffered injuries all over her body and was taken, under guard, to hospital.
However, even more cruel than the burns: instead of providing help and psychological care to the traumatised family, M.M. was charged with ‘arson with intent‘, ‘endangering life and the objects of others‘ as well as with ‘damage of an object of common utility by means of fire‘ after the incident.

At the time of the desperate act, M.M. had already been living with her husband and three small children in the camp “Moria 2” for more than five months under inhuman conditions. The situation in the camp was catastrophic in the winter of 2020/21. The area is close to the sea and completely unsuitable for living: The tents repeatedly collapse or are flooded due to strong winds and heavy rain. There is a lack of medical care, privacy, electricity, running water, hot showers, functioning toilets and other hygiene facilities. As if this were not enough, on 23 January 2021, the Greek government publicly confirmed that dangerous levels of lead had been found in soil samples.

M.M.’s lawyer from the organisation HIAS Greece points out that pregnant women are on the list of vulnerable groups that should be given special reception conditions; therefore, as a pregnant woman, M.M. should have been moved to suitable accommodation.

In the meantime, the family and their now four children were able to resettle in Germany, following a corresponding application by her lawyer. M.M. is still severely traumatised and the whole family is suffering greatly from the ongoing prosecution. Even in Germany, the family has not yet received the necessary psychological care to be able to come to terms with their traumatic experiences and face the upcoming trial.

The prosecution of M.M. for her suicide attempt, which is not punishable under the Greek penal code and is now brutally classified as ‘intentional arson‘, is an escalation of the criminalisation of people seeking protection. It is also a distraction from the responsibility of the Greek state and the EU to ensure adequate living conditions for people seeking protection. Following the same pattern, six young men and teenagers were charged and convicted, without any evidence, for allegedly setting the fire that led to the complete destruction of the original Moria camp in September 2020. (https://freethemoria6.noblogs.org/)

Alice, borderline-lesvos: “It is the most incredibly humiliating criminalization case we have ever heard of. A woman, a family in desperate need for help, was screaming for help months before the tragedy happened. They could not survive bringing another child into the world while still being in the camp. She saw no other option than to harm herself in order to escape the stress and pain she was in. We met her after still being in deep pain about the lives of their four children… and then the shock: Instead of helping the family, the mother of four children is charged with arson. Instead of evacuating them many many months before from the horrible conditions they were living in, giving them a safe space to care for a newborn, she was criminalized. M.M. is an example for the Greek migration managers to show no tolerance for any needs that refugees will speak out for.”

Kim, “You can`t evict Solidarity” campaign: “The case against M.M. is by far not the first time that migrants in Greece have been charged on absurd grounds and without evidence. However, in the current political environment, the criminalisation of migration has reached a new level, as have the brutal pushbacks of migrants by the Greek Coast Guard and Frontex.”

Christina, CPT Aegean Migrant Solidarity: “Unfortunately, the Greek authorities surprise us every time with the ever-increasing criminalisation of migration and migrants. Apart from rescuing people at sea and solidarity, the Greek authorities go one step further by criminalising desperation. Desperation that they themselves have created in the incarcerated men and women in the detention centres. The case of M.M. is a monument to inhuman treatment and devaluation of life.”

In May 2022, we celebrated the success of the acquittal of N., a young father who was charged by the Greek judiciary with endangering the welfare of a child after the tragic death of his son during the crossing from Turkey to the EU. This case also exemplified the cynical political approach under which traumatised refugees are prosecuted on flimsy grounds. Even in the case of an acquittal, these proceedings cause immense psychological damage to those affected. The systematic criminalisation of those seeking protection only serves the purpose of distraction and deterrence, to the distress of people who have already become victims of a racist system that forces them to flee and, at the same time, wants to punish them for seeking a life in safety. The young father’s acquittal was only possible thanks to the large solidarity network that fought for his release together with his lawyers, but most cases of criminalisation of migration take place away from public attention and usually result in years of imprisonment. (https://freethesamostwo.com/de/ueber/)

We demand a fair and transparent trial on 22 June! This can only lead to an acquittal for M.M.
We stand in solidarity with M.M. and her family and against the deadly European border regime!

We call on the Greek state and the EU to take responsibility for the inhumane camps!
– Stop the criminalisation of refugees and migration!
– Stop the isolation of people on the move at the borders of the EU!
– No more Morias!
– Drop the charges against M.M.!

Get active: SIGN the PETITION: Freedom for M.M. – Woman on trial in Greece for attempted suicide

The trial is postponed!!! There is no new date yet. The court in Lesvos is once again relying on the deferral of justice, demoralisation and exhaustion. This approach is now an established part of the brutal criminalisation of migrants and solidarity groups and requires a lot of energy and resources. M.M. and her family remain in uncertainty and are not allowed to come to terms with their traumatic experiences.

A witness for the prosecution, a tent neighbour of M.M., did not appear. Although his written testimony was available, the court took the opportunity to postpone the trial. We are outraged and angry!

The trial took place, once again, in a hostile atmosphere. The motion of the defence to lift the obligation according to which the severely traumatized woman must constantly report to the Greek embassy, was also rejected.

We continue to stand in solidarity with M.M. and her family!